Liquid-Gas Transients Modeling water hammer due to trapped gas can involve complicated equations while requiring potentially overly conservative assumptions.  In an effort to better show the effects of different modeling methods, this paper will compare and contrast several factors that play a role in developing water hammer pressure predictions. 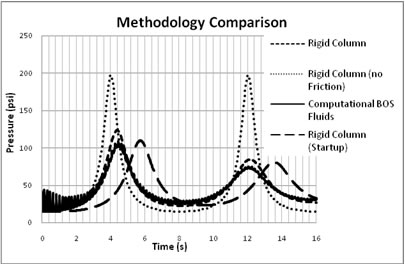 The plot “Rigid Column (Startup)” shows that this alters the time scale and reduces the peak pressure obtained.  A final consideration can be to move to a propagative model that requires the use of computational methods.  We used BOS Fluids in this case to model the scenario and as evident in the early peaks of the plot it tracks the propagation of pressure waves throughout the system, eliminating the need for conservative assumptions.  In the case of this plot BOS Fluids did not include the pump startup so that it would show a better benchmark against the rigid column and frictionless cases. 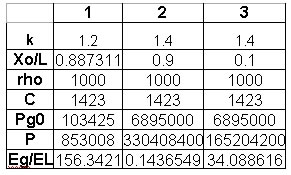 In order to analyze the energy equation three cases were studied. The first case is slight pressurization starting with a large liquid column compared to the gas column (near 90% of the length filled with liquid, and 10% gas). The second case is a large pressurization starting with a large liquid column compared to the gas column (90% liquid-filled, and 10% gas). Finally, the third case is the same as the second case except the liquid column is only 10% of the total length rather than 90%. The Table shows the Eg/EL ratio for each of the three cases, which is the energy stored in the gas over the energy stored in the liquid. P was calculated using the rigid column method for all three cases. The plots for the three cases are shown below. The plot for Case 1 clearly shows that the rigid column analysis and the bulk flow analysis, which includes liquid compressibility, predict very similar peak pressures. This can be explained by looking at the energy equation’s ratio of 156 for Case 1, which is essentially saying that the gas bubble holds 156 times more of the system’s energy than the liquid column. Therefore, modeling the liquid column’s compressibility, and thereby its ability to hold energy, is not important for Case 1. However, when the energy ratio is less than one (as is the case for the 2nd data set) the results change significantly. As the plot for Case 2 shows there is a large difference between the rigid column analysis and the bulk flow analysis. The plot for Case 3, with an intermediate ratio of energies (Eg/EL = 34 for Case 3, rather than 156 for Case 1, and 0.14 for Case 2) shows a moderate difference between the two but not as large as Case 2, this is with a ratio of 34. 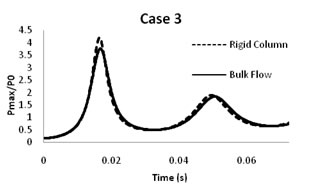 Closed-Form Solutions. To develop the equations for pressurization of the trapped bubble, a logical first step is to approach the problem from Newton’s F=MA. The force being applied to the liquid column is the differential pressure from its starting boundary to the boundary with the air bubble, while the acceleration is linked to the interface boundary. A depiction of the liquid/gas system is shown below.

Because the model is frictionless, the pressure peaks do not degrade with time. Friction is very easy to include however as shown by the equation below.

This equation incorporates the friction term, where U(t) represents the velocity of the interface between the liquid column and gas bubble as a function of time. The same liquid-gas system parameters used in the no friction analysis were used for the above equation and plotted below. 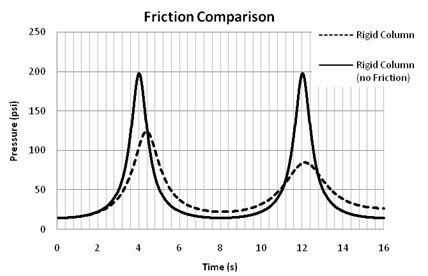 As expected, the addition of the friction term significantly reduces the first peak and further reduces each of the following peaks.

Pump Ramp-Up. The effects of compressibility have already been discussed earlier in the paper so therefore the next addition to the equation will be pump startup. Pump startup is a very important addition to alleviate undo conservatism because the assumption of instantaneous pressure application is extremely unrealistic. The following equation shows how pump startup can be included into the previous equation.

The exponential term is a variable ramp up that starts close to 0, the inclusion of +.01 in the denominator is to prevent a discontinuity at time equal zero; the function starts slightly above 0, and works up to 1. The time it takes to get to 1 can be modified by the variable gamma. To depict the difference this makes, cases 1 and 2 were plotted with a gamma of 2, as shown below.

Bubble Size Effects. A final part of addressing water hammer related to trapped gas bubbles is to look at the relative effects of bubble sizes on the peak pressure. The relationship between gas bubble size and peak pressure is studied here for pump startup and for changes in the driving pressure. The two plots side-by-side show the effect of bubble size (plotted as a percent of length) for a 50 to 290 psi pressurization and for a 150 to 290 psi pressurization.

In the case of the examples shown above the bubble size plays a larger role for greater changes in pressure. Of course this can be skewed as startup effects are not included, additionally the trends are reversed for the numerical model as compared to the rigid column model. So it appears the most accurate model, the numerical method, shows little correlation between bubble size and peak pressure for smaller pressurizations and shows a slight trend of decreasing pressure spikes at smaller bubbles sizes for large pressurizations.

In order to better compare to real conditions, the effect of bubble sized was studied with startup conditions.  The plot of this study is shown below. 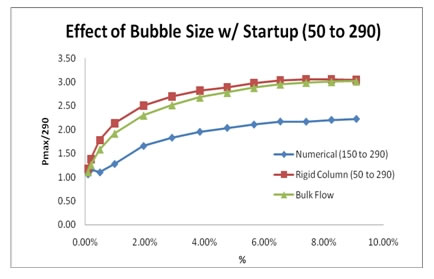 For the case studied above, the smaller bubbles reduce the pressure spike when pump startup is included. This effect should be analyzed over a range of parameters to establish trends.

In Summary. It is clear from the few cases analyzed here that certain liquid-gas scenarios require analysis models to capture propagative effects, while others can be simplified and still produce conservative but reasonable pressures. The energy equation is a good starting point to identify whether a simple rigid column analysis will be sufficient. Additionally, the inclusion of pump startup can significantly reduce the over-conservatism in peak pressure in certain cases. It is important to realize that any level of complexity can be applied to these problems but it will always be beneficial to know, ahead of the analytical effort, what benefits can be had from the more complex analyses. 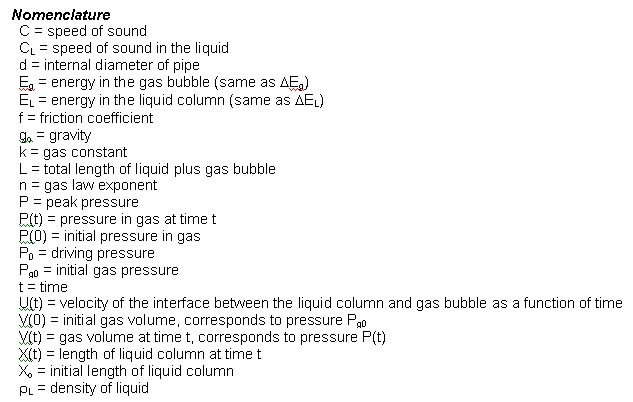 Becht’s computational fluid dynamics model (CFD) indicated that there was little dispersion of the steam exiting the nozzle and that the velocity of the steam mixing with the condensate was relatively high. The superheated steam contact with the cooler condensate resulted in a violent reaction with localized heating and cooling of the vessel shell. This cycling can cause thermal stresses which can result fatigue cracking. Generally, fatigue cracking occurs at welds and heat affected zones adjacent to the weld. Notably no such weld cracking occurred at

The model includes the tank waste and the effects of concrete degradation as illustrated below. The soil and concrete are modeled using linear elastic material properties with concrete degradation simulated through the use of equivalent degraded elastic properties. When linear elastic material properties are used to model soils, there is potential for developing artificial soil arching. Excessive arching behavior will result in underestimating the vertical loads on the concrete dome and tank sidewalls. To mitigate the potential for soil arching above the dome, vertical contact surfaces are inserted into the soil above the dome to create annular rings of soil that are free to displace vertically consistent with the tank dome, but allow the load to be transferred laterally during horizontal motion. This effectively creates a nonlinear yield mechanism that acts in the vertical direction only and allows for horizontal load transfer from one ring to the other ring. A low coefficient of friction is used, thereby ensuring 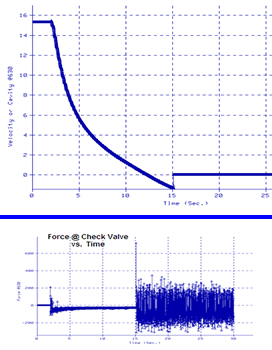 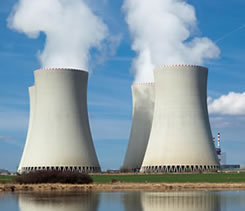 Becht Nuclear Services offers free, 1-hour overview sessions on a variety of topics such as:

Each seminar is followed by a question period for participants.