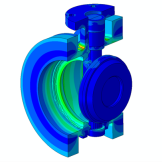 Becht engineers performed this analysis on a high temperature valve for a jet engine test facility. The valve had an operating temperature of 1850°F with short term excursions to 2075°F. The valve is exposed to thermal shock heating due to the jet engine gas being forced through it at a high velocity. The work included a finite element thermal transient analysis, coupled with a stress analysis, to determine the stresses on the valve during the heat up and cool down during operation. We determined that the highest stresses were experienced only a few seconds into the transient cycle, something that a steady state analysis would not have captured. Using the information from the stress analysis, a fatigue life assessment was performed on the valve.