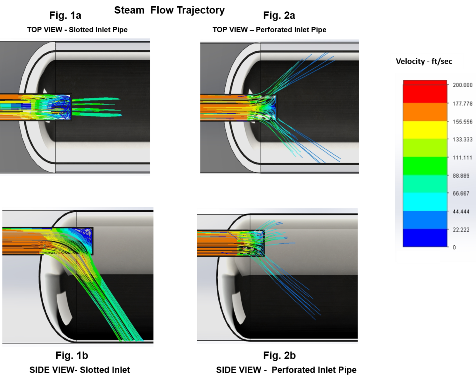 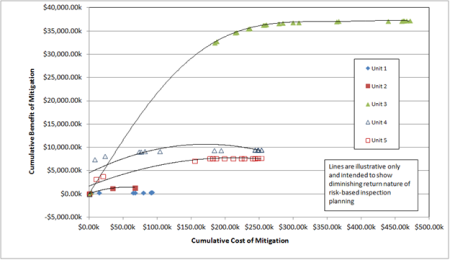 Using ultrasonic testing (UT) and visual inspection data, Becht Engineering customized its proprietary API-579-1/ASME-FFS-1 compliant General Metal Loss and Local Thin Area evaluation software to create a program capable of evaluating the maximum allowable working pressure (MAWP) of these pressure vessels in an efficient manner. The software  is very easy to use and presents the results in a user-friendly format for evaluation by engineers and managers.

Because of the extensive nature of the corrosion, large files containing UT scan data needed to be evaluated, and the software was enhanced to parse and analyze the LTAs in the large datasets. This highly efficient process allows rapid evaluation of LTAs, and most vessels were completed in less than one week’s time. Becht’s software modification has also included the COMPRESS vessel design software output as an input to these FFS assessments. Becht has performed Level 1 and Level 2 LTA analyses on various vessels, evaluated sections of vessels for total replacement, analyzed external damage caused by shrapnel from previous wars, and developed repair procedures within the means of the maintenance team for this remote oil field.

Fitness-For-Service of a Vacuum Tower with Wall Thinning

In 2011, Becht Engineering was approached by a major refiner on the US West Coast to assist with the evaluation of two vacuum towers.  Due to a process change, corrosive products were occurring at elevations in the towers where there was insufficient protection against corrosion.  As a result, significant and extensive corrosion was measured.  In many places, the wall thickness was less than the tmin established by conventional engineering assessments.

Trevor Seipp, P.Eng. from Becht Engineering’s office in Calgary, Canada took on the job of evaluating the towers’ fitness-for-service.  Typical evaluations of local thin areas in pressure vessels and piping are performed frequently and easily by skilled engineers.  However, this particular situation was unique in that the corrosion was extensive – the corrosion map data for each tower had over 20,000 data points, and the normal operating condition for the vessel was external pressure (vacuum).

Trevor was able to quickly write a custom-made subroutine for our finite element analysis software, ABAQUS, that used the corrosion map to modify a finite element model to accurately simulate the corrosion extent with the actual remaining wall thickness.  Using this tool, we were also able to simulate future uniform corrosion forecasts.  Finally, we performed an elastic-plastic stress analysis that also accurately simulates buckling failures.  It is vitally important to evaluate for buckling failures because that is the primary failure mechanism of vessels that operate under external pressure (vacuum). 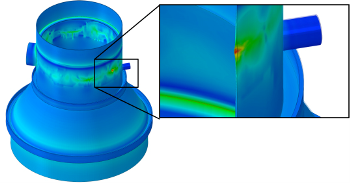 Each tower was evaluated for fitness-for-service at the current corrosion state.  Each tower was fit-for-service.  Future uniform corrosion forecasts were also evaluated from the current time to the next scheduled maintenance outage.  One tower was fit-for-service at the next maintenance outage.  The other tower would not meet the required design margin at the next maintenance outage, but was not predicted to actually fail.  However, state law and good engineering practice require compliance with the required design margin.  Accordingly, a fillet-welded lap patch repair was designed.  This repair was also simulated in the analysis to determine if it would be suitable; and it was.

All of this work was completed in less than 3½ weeks; on-time and under-budget.  Becht Engineering’s report was presented to the State Pressure Vessel Regulator and as a result the refinery was permitted to continue operating.  The scheduled maintenance outage has since occurred and there were no further incidents with the vacuum tower. 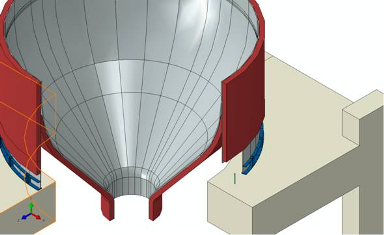 A major refinery in the Middle East requested Becht Engineering to evaluate the problem of their coke drums walking and tilting, and the baseplate/skirt/anchor bolts corroding. After an initial site visit by Trevor Seipp, Division Manager of Becht Engineering Canada Ltd., we determined that the lower portion of the skirt as well as the entire baseplate needs to be replaced for all eight coke drums. In addition, some of the coke drums needed to be re-leveled, and all needed to have shims and slide plates installed. Finally, all of the anchor bolts need to be replaced. And all of this needs to be done without any downtime. Building on the success of our world’s first in Texas, Becht Engineering developed a window methodology to complete the work whereby after we temporarily jack and re-level the drums and place them on temporary shims and slide plates, entire windows of the skirt (~1m x 1m) would be cut out and replaced with new material. While the window is cut out, however, we will have excellent access to the concrete deck to enact the anchor bolt replacement. What will make this project especially challenging is that all of this work needs to be completed while the drum remains in operation. Plus, there are 24 windows per drum and eight drums. All of this work needs to be developed using first-class engineering skills. Since the internal pressure, high temperature, and widely fluctuating weight due to the hydrocarbons, coke, and quench water all have to be evaluated during the repair process, Becht Engineering applied its expertise in finite element analysis (FEA) to the task. Our analysts are among the best in the business, and have performed evaluations on some of the most challenging problems. 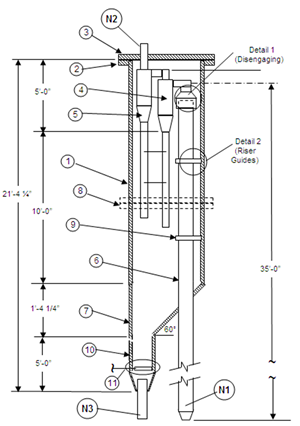 Becht has worked closely with the a number of our clients' process research and engineering groups on the on the scale-up of new process technology. One example of such an activity is the development of a process and mechanical design specification for a pyrolysis-based fluid bed biomass pilot plant. Becht engineers in the areas of fluid-solids process design, process simulation, analytical methods and mechanical design worked with a joint venture company to develop a process design specification of sufficient detail to provide an EPC contractor information needed to develop the detailed design. The specification included the preliminary design of the three major vessels (see reactor sketch) and solids transfer lines. In addition, Becht worked on the development of the process model (PROII simulation), the characterization of liquid product from the reactor overhead system and recommended the analytical laboratory program and methods needed to characterize the reactor overhead products