The model includes the tank waste and the effects of concrete degradation as illustrated below. The soil and concrete are modeled using linear elastic material properties with concrete degradation simulated through the use of equivalent degraded elastic properties. When linear elastic material properties are used to model soils, there is potential for developing artificial soil arching. Excessive arching behavior will result in underestimating the vertical loads on the concrete dome and tank sidewalls. To mitigate the potential for soil arching above the dome, vertical contact surfaces are inserted into the soil above the dome to create annular rings of soil that are free to displace vertically consistent with the tank dome, but allow the load to be transferred laterally during horizontal motion. This effectively creates a nonlinear yield mechanism that acts in the vertical direction only and allows for horizontal load transfer from one ring to the other ring. A low coefficient of friction is used, thereby ensuring that the soil load is carried by the tank structure. 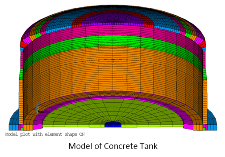 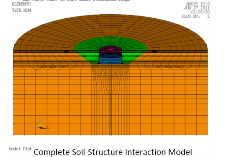 The response history analysis results in large amounts of information generated during the simulation. To efficiently manage this information, post-processing routines are written to extract the maximum concrete demands in the tank and envelope those demands both spatially and temporally. This approach allows the analyst the flexibility to review and present results that are enveloped in both space and time, or that are enveloped in either space or time. The complete results that provide the response history for each point of interest in the model are also available, although the file sizes are much larger.

The seismic demands on the tank are combined with thermal and operating load demands and the combined demands are evaluating per the provisions of the American Concrete Institute Code 349 (ACI 349) entitled Code Requirements for Nuclear Safety Related Concrete Structures. When the updated analysis of record for the SSTs is complete it will provide a defensible technical basis for operating and maintaining the tanks and performing waste retrieval activities for the SSTs.