A cooling tower is the largest heat exchanger in a plant, designed to remove heat from a process by a combination of sensible heat transfer and evaporation of water in contact with the surrounding airstream. Mechanically induced draft towers have fans located at the top to draw air through the tower and may be either crossflow or counter flow in configuration. When a new tower has been built, or an existing tower rebuilt or upgraded, it is important to verify that the tower will deliver the thermal requirement with the stated (quoted) fan horsepower. Retrofits to make up short falls in performance can be very expensive.

Contrary to widely held views, cooling tower performance calculations are not an exact science but are estimates based on a variety of data. For example, data on fill (packing) capability can come from tests by a  tower manufacturer, fill manufacturer’s testing, independent tests (such as EPRI), or other sources. There will be differences in these sets of data. The same is true for fan efficiencies, drift eliminator pressure drops, etc., so depending on which data is selected, there are many permutations and combinations.

The purpose of a “rating” or an independent check on someone else’s rating is to estimate the performance of a cooling tower, generally at its design conditions, and to provide an opinion as to whether the assumptions and data utilized in a particular rating are reasonable.

The thermal design parameters for a cooling tower are: inlet wet bulb temperature, temperature drop across the tower (delta T or range), and the tower approach to wet bulb (this is the cold water temperature minus the wet bulb temperature). The graphical representations of these parameters are known as “demand curves”. Any specific sets of curves will be different for crossflow vs. counter flow towers. They will also vary according to elevation (barometric pressure).

The fill or packing utilized in the cooling tower has a “capability”. This is a function of the packing dimensions and to some extent, the air velocity through the packing.

When the demand curves and a fill characteristic curve are superimposed, the result is that shown in the example below: 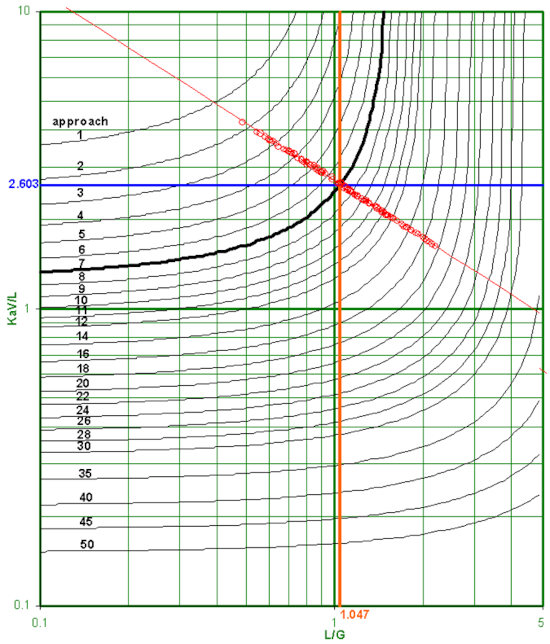 The plots are on log-log paper and are given in terms of a y coordinate (KaV/L) vs. an x coordinate (L/G).

L/G is known as the liquid (water) to gas (air) ratio. L is set by the water flow rate or circulation rate over a tower cell, and G is the air flow rate for a fan.

Referring to the figure above, at the intersection of the fill curve with the demand curve for a specified approach to wet bulb, the x axis shows the design L/G. The y axis shows a parameter called KaV/L which is related to the size of the tower but is not directly involved in rating calculations.

In this example, the design approach is 7 deg F at a 65 deg F wet bulb, meaning that the cold water supply from the tower is 72 deg F. Since this is for a 15 deg F range, the hot water return would be 87 deg F. The corresponding L/G is 1.047. Since L and L/G are known, G can be calculated. G corresponds to a power requirement for the fan, usually expressed as brake horsepower (bhp). This is stated by the tower manufacturer as one of the tower design parameters.

The purpose of the rating or check rate as it is sometimes called is to compare the fan bhp stated by the manufacturer (or others) vs. and independent calculation of the bhp requirement.

This is accomplished by following the air path through the cooling tower components, expressed as a series of pressure drops in inches of water column (in w.c.). Typically these include pressure losses at the inlet, through the fill, and through the drift eliminators. There are also other minor contributions such as plenum losses for example. These are summed to obtain a total static pressure (tsp). The pressure drop through the fan is known as the velocity pressure, (VP). Fan stacks (greater than 10 ft in height) offer some velocity recovery pressure, so it is really the effective or net velocity pressure (EffVP) that is used in the rating calculations. Adding the TSP to the EffVP gives the total pressure (in w.c.) through the tower.

The formula for determining the required bhp per fan is:

The fan efficiency and the losses through the gearbox must be taken into account to determine the required bhp.

There is a cubic relationship between airflow and power: it takes roughly 30% more horsepower to pull 10% more air through the tower (in other words, increase G by 10%), other things remaining constant.

If the rating determination of bhp agrees with the vendor’s stated or quoted bhp, then the tower is said to be 100% capability. If for example, it was determined that the quoted bhp is 150 bhp/fan and the required bhp was found to be 170 bhp/fan, then the tower capability (as quoted) would be:

Note that all of the above pertains to calculations on paper. There is an added dimension to the tower’s performance “as built”. Fan tip clearances, and air or water bypassing could contribute further de-rates to actual tower performance.

It is for this reason that the customer’s interests are best served by including a tower acceptance test (per CTI ATC-105) in the contract or negotiations with the tower manufacturer.

In conclusion, checking or rating the cooling tower against the stated or quoted performance can help to avoid contractual issues and expensive after-the-fact retrofits to correct any shortfalls or deficiencies.

Share This Article:
How to Get Started on a Reliab…
|
Process Heater Tube Temperature Mon…