Evaluating Rework and Delays can help improve the

The construction industry’s challenge in meeting cost and schedule budgets is greatly affected by rework.  A regional initiative in the early 2000s was tasked with developing a simple tool to capture and analyze field rework at major industrial construction projects.  This was then applied at a production facility with a large number of smaller projects progressing at the same time.  The same tool was also modified to track delays in the construction work caused by factors other than rework.  Early results were adequate in identifying the primary causes of rework and delays, as well as initiating some early mitigation measures.

Rework in the Construction Industry

The construction industry’s performance in this area has been well documented and can be classified as subpar.

Rework is estimated to represent between 2% and 20% of total costs, according to the Construction Industry Institute (CII) (average of 12%).  This, of course, has a negative impact on the project’s schedule.

Regional Efforts to Address this Challenge

Several large-scale industrial projects were developed and built in the Province of Alberta during the early 2000s. Several of them were constructed at the same time, putting a strain on limited engineering, project management, and construction resources. At the very least, rework performance at that time was thought to be in line with the CII’s estimate which was widely regarded by all stakeholders as unacceptable given that many projects were significantly over budget and behind schedule.

A local “users’ group” in the construction industry commissioned a research initiative to find a simple way to track and measure rework on these large projects.

In 2001, preliminary surveys were completed, and a formal pilot application was submitted in 2003.  The suggested tool was completed in 2006 and is now freely available online – see reference.  This tool was then adopted by a number of plant owners and construction firms.

It’s worth remembering that this tool was created for large-scale “greenfield” industrial construction projects.  We can assume that this results in a somewhat limited ability to apply learnings right away – mostly focused on improvements to future projects.

Application for Construction Work at an Operating Plant

We decided to implement a version of this program at our operational plant in 2008.

At this location, project work consisted of a portfolio of sustaining capital work, with 50 to 100 separate items at any given time in various stages of development (front-end engineering, facilities definition, detailed engineering) and construction.  In an operational plant, these were almost entirely ‘brownfield’ construction projects – that is additions, replacements, or modifications to existing equipment.  As an added complication, many work sites have limited physical access and are frequently ‘competing’ with maintenance and other operational tasks.

Construction work is entirely contracted out to evergreen / standing contractors, with the majority of the work being done on a reimbursable cost / time-and-material basis. In-house staff (both employees and contract personnel) handle the majority of front-end project development.  A local third-party is in charge of detailed engineering, which is also done under a long-term contract.

This ‘low-tech’ method was a good way of introducing the program – the cards were widely distributed to the construction managers, field supervisors and contractors.  They are easy to carry around and to document any rework events as they are observed.

All participants were given the following instructions:

The leadership team would analyze the submitted rework cards at least once per week to review the data and confirm the reason(s) for the rework.

Of course, this recording method does not ensure that all rework is captured. We were confident, however, that by widely disseminating the cards and encouraging all stakeholders to report, we would have enough data to accurately target improvement opportunities.  Major rework events, in any case, would be difficult to go unnoticed, as their impact would undoubtedly be reflected in the project’s cost and schedule performance.

The rework data was classified according to the industry tool’s categories.  The cost of rework was calculated using simple labor, equipment, and material factors.  A monthly summary was created, presented to the construction team, and used to identify opportunities for improvement.

Rework was estimated to be around 0.5 percent of the total project cost after the first year.  While this is encouraging, we were able to identify the most likely main source of rework and have taken some initial steps to address it. (See Figure 2)

We investigated further in the area of engineering and reviews, and after speaking with the engineering and construction teams, we discovered that the majority of errors or omissions in engineering documents were caused by field conditions that differed from expectations, specifically in terms of elevations and clearances.

To improve the precision of foundation and structural steel engineering and installation, we established additional elevation benchmarks throughout the facility. We concluded that the very limited number of benchmarks that were previously available may have resulted in errors (and additional time) when transferring elevation data to the actual work locations. 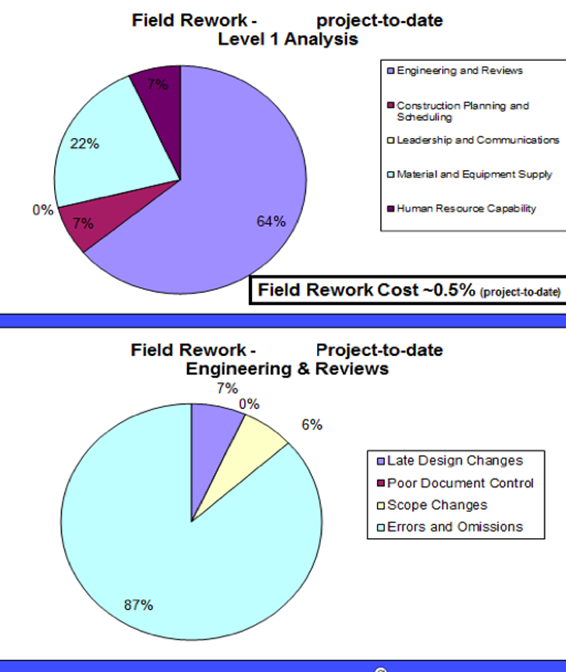 Expanding to Include Construction Field Delays

Individual project schedule commitments were regularly being missed by this project management team.  They decided to investigate field delays and interruptions during construction activities in order to see if these were major contributors to schedule deviations – or was this a case of poor schedule development?  Again, the goal is to see if there are any areas where things could be better.

The team simply added “delays” to the rework card as a reporting item.  They requested that only delays not caused by rework be recorded to avoid duplication.  The delay event categorization simply followed the same structure as the plant maintenance group was using at the time, and it includes any situations where the construction work crew is idle before the planned work can start or resume, as well as situations where a work crew must be redeployed to other tasks.

After about one year of reporting, the team determined that approximately 1% of field work hours were lost due to delays.  The majority of these delays were due to interruptions caused by plant operations – typically, limited and temporary evacuations due to operating conditions or planned activities but also due to emergency drills. (Figure 3)

At this time, the project management team decided to continue to monitor delays and look for further adverse trend.  They would then intervene and implement a mitigation plan when and if needed. 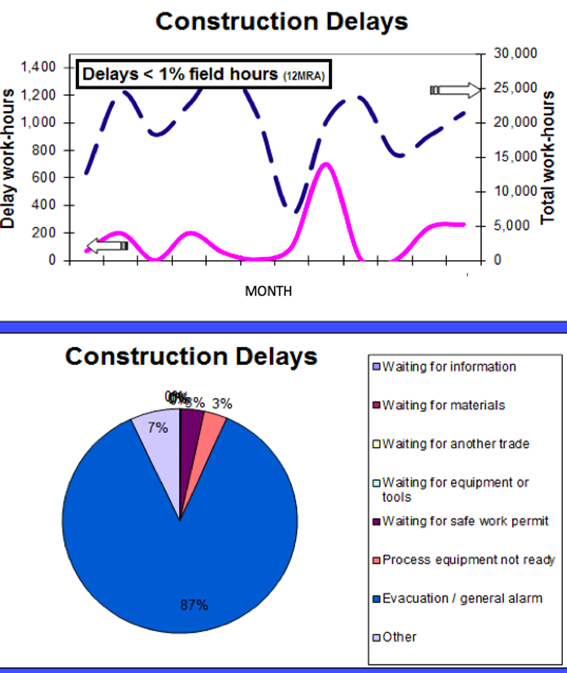 Construction industry data shows that field rework is a significant contributor to cost and schedule overruns.  The first step in improving this is to measure actual performance and determine the causes of the rework.  A regional initiative offered a simple tool for data collection and analysis but this was strictly applied on large, greenfield industrial project.

A project management group adopted the tool for a large portfolio of smaller construction projects that were mainly modifications or additions to existing equipment in an operating facility.  The same tool and process was used to capture any delays during field construction.

While recognizing that the reporting method may be imprecise, sufficient data was collected and analyzed to identify the main causes of rework and delays and to initiate some early mitigation steps.

A key learning is that such an initiative requires the project team’s commitment to report, analyze and improve its performance with regards to rework and delays.  Furthermore, the context in which the construction work is carried out, such as organization, staffing, work processes and contracts, must not materially change in order for the conclusions to remain applicable.

Having a continuous ‘stream’ of capital expenditures allows for the rapid identification and implementation of improvement opportunities for immediate benefits.

Wish to streamline your construction process?  Reach out to a Becht expert regarding your future plans by clicking below.