Assessing Actual vs. Planned Work Hours of a Maintenance Outage

For maintenance outages, job plans are created based on certain labor productivity assumptions.  While there are a variety of methods for assessing actual productivity during the course of work, there is a simple methodology for comparing and analyzing total work-hours expended against the planned labor budget, typically for each major contractor.  A number of prerequisite processes and procedures must be in place at the site in order to achieve this.  The evaluation proceeds by deducting the approved work changes, planning errors, and owner-caused delays and rework from the total work-hour difference.  The remainder can be attributed to delays and rework caused by contractors, and finally, to work productivity. After that, a second, more difficult analysis is required to determine the cause(s) and mitigations for any productivity deviation.

When faced with maintenance outages that went way over budget and schedule, this author frequently heard from others about how bad the contractors were, how their capability was ‘obviously’ over-stretched, and so on.  While this may be true in some cases, a simple analysis may reveal other causes for the overrun.

While the productivity assumptions used to create the job plans may not be entirely accurate, there are ways to mitigate this so that you can figure out what caused the deviations.

The difference between actual and planned work hours will be evaluated using one method described in this paper.

Each job plan (maintenance, project work, etc.) must consider and reflect the workers’ productivity in completing a specific task or job step.  How long will it take to cut, unbolt, remove, clean, inspect, install, weld, paint, insulate, etc. this piece of equipment with a specific number of workers with a specific skill set at a specific location?

At a higher level, the assumed productivity has to consider constraints like:

Finally, the Planner must use one or more of the following methods to determine the duration of each task or job step:

A productivity metric is always applied and used when planning outage work, whether it is explicitly calculated or implicitly used.

Measuring Productivity during the Outage

During the outage, many locations will attempt to assess worker productivity.  This is usually done to give real-time feedback to the site supervisor and execution contractor so that corrective actions can be taken if necessary.  In most cases, there is no attempt to ‘reconcile’ to the productivity assumed in the job plan, but rather to ensure that the work is progressing at an acceptable rate.

The following are some of the methods used:

While theoretically possible, given the logistical and coordination requirements, measuring the planned duration or labor hours for a specific planned task – whether individual or group – is not very practical.  The planning team is very interested in learning how accurate their productivity estimates are.

Similarly, the outage management team would like to know how well the execution contractors performed in terms of meeting the plans.

To answer these questions, we propose a simple methodology that requires a few conditions:

Why should we reconcile planned and actual total hours?

Reconciling work hours after the outage

The goal is to pinpoint the main reasons for the discrepancy between the final total work hours and the original schedule.  This is done for each of the main execution contractors, with the goal of identifying both strengths and areas where performance may not have met expectations, as previously mentioned.

Changes in the intended work are the first and most obvious cause of the discrepancy between actual and planned hours.

These could include deletions or reductions in work scope.  The important point is that these are all deliberately planned and included in the job plans as they get identified and sanctioned.

They should be estimated mostly using the same assumptions as the ‘base’ work but may include an additional allowance (productivity debit) due to the ‘break-in’ type of work these changes represent, for example: interruptions (stop / start) in the flow of work, extra resource mobilisation leading to delays.

When planning errors or omissions are discovered during the outage execution, the site must have a method to identify and quantify them.

Missed steps in a job plan or calculation errors that either overstate or understate the work hour requirements are examples of these.

These issues should be included in the execution contractor’s performance scorecard if the job plans were developed by them.

Let’s hope these are a rare occurrence…

These can be reported by either contractors or site personnel and include, among other things, the following:

The delays should then be classified as being caused by the site or the contractor.

Simply put, rework occurs when you must touch with the same piece of equipment multiple times.  This entails redoing all or part of the outage work, not necessarily right away, but possibly after the final tests before start-up or during the recommissioning of plant equipment.

Rework can be reported by contractors or site personnel, and should include an estimate of the work hours spent on the rework as well as the reason(s) for it.

Almost all rework will be caused by the contractor, but some may be instigated by site / owner issues: redo / fix work following the discovery of a material specification error, or because of insufficient planning / scheduling – work is scheduled out of logical order, necessitating the removal and reinstallation of previously completed work.

We should arrive at the best estimate of the true productivity difference against what was built into the job plans after accounting for all of the above additions and deductions.

This variance, whether favorable or not, clearly belongs to the execution contractor.

The following are examples of possible immediate causes:

Issues with the workforce include trade skills, fatigue and weather effects, and communication abilities.

Required mobilization, including tools and equipment, is not yet complete.

It may be hard to distinguish between these causes because they are difficult to quantify. If this becomes important, look for the following hints:

Let’s briefly illustrate with an example:

Reviewing the change log, we assigned 8,000 of the 20,000 hours difference to client-initiated changes.

A total of 200 hours of planning errors or misses were reported by the Planning Team.

The job delay reports for this particular contractor show an estimated 500 hours of work interruptions, with 300 of these site-caused.

The remaining 10,550 work-hours are attributed to unfavorable work productivity against the original plan.

We can calculate the contractor’s final productivity index for this contractor as follows:

A productivity index less than 1 indicates that the contractor took less hours than planned to complete the its scope of work (including approved changes).  Alternatively, an index greater than 1 implies than productivity was worse than planned.

In our example, the productivity index is:

Finally, the site leadership team with the contractor’s input, concluded that about 20% of the unexplained deviation was due to workforce issues (2,100 hours) with the remainder caused by less than adequate leadership / management.

Figure 1 below summarizes this first-level analysis: 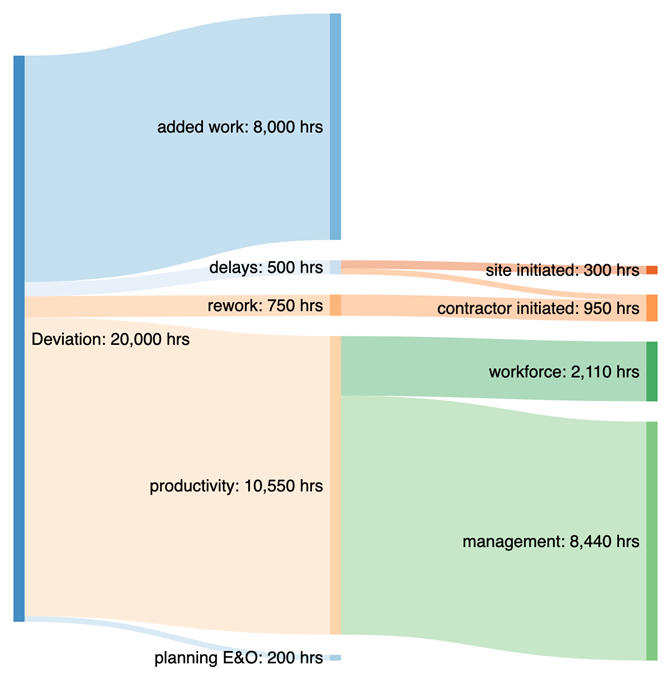 The next step is to look for more fundamental reasons for the deviations (root causes).  This is where we should figure out whether the job plans’ initial productivity assumptions need to be adjusted or if there is a fundamental execution performance problem.  For example, this secondary analysis must determine whether the current productivity result is a one-time or recurring issue; whether anything in the contractor selection process needs to be addressed, and so on.

This simple analysis will aid in avoiding rash decisions about planning accuracy and worker productivity (vs. planned).  Jumping to conclusions may obscure the underlying reasons why actual labour costs differ from (exceed!) the plan, target, or budget.

Work or scope changes, planning errors or omissions, owner-caused delays and rework must all be subtracted from the difference between actual work-hours and the original plan.

Any remaining discrepancies can be attributed to issues with the productivity assumptions used in the job plans or the demonstrated work efficiency during the outage.

The first issue can be addressed by having the execution contractor validate or even build the job plans.

Finally, contractor performance can be summarised as follows:

If it’s the latter, more research is needed to see if there are any other systemic issues that need to be addressed.

While this type of analysis is geared toward an after-the-fact evaluation, if the data is available, it can also be completed during the outage’s execution.

The What, Why and How of Wrench Time

Have questions about your outage efficiency in maintenance planning and execution? Contact Becht to speak with an expert.

Share This Article:
Improving Energy Efficiency - …
|
A Step in the Right Direction

Assessing Actual vs. Planned Work Hours of a Maintenance Outage

Controlling Your Maintenance Turnaround Scope, from Kick-Off to Closeout
Turnaround

Getting Your Maintenance Turnaround Preparations off to a Good Start
Turnaround