First, you will need two 1500-ton capacity cranes with 500 feet of boom each. Then you will need to design and build a specialized rigging system to join the two cranes to the nacelle with equal loads. Top it off with an engineered crane foundation to support the weight of the cranes and their load.

The Haliade-X 12 MW Offshore Wind Turbine Prototype was erected in Rotterdam, Netherlands in November of 2019. General Electric designed and built the massive wind turbine prototype with intention of placing production models offshore around the world. The sheer size of the machine is incredible. 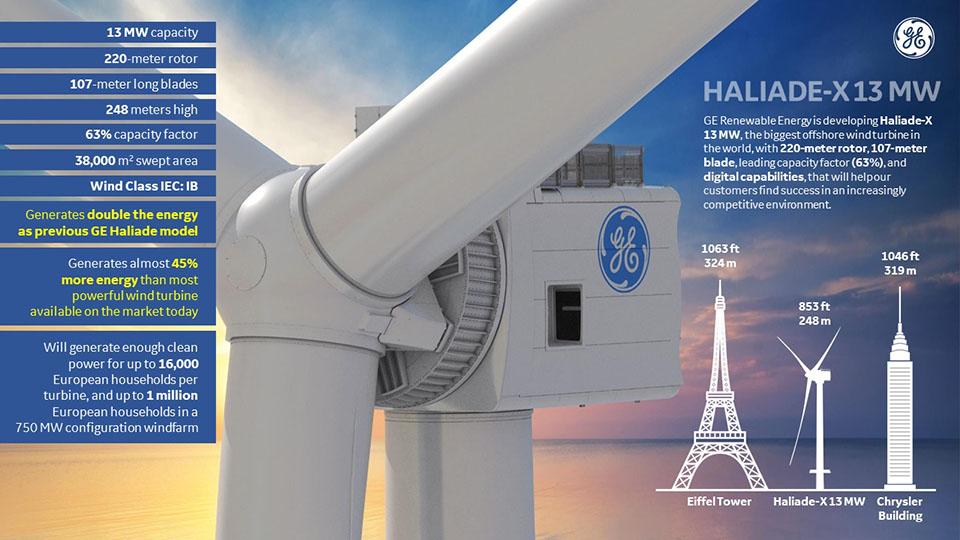 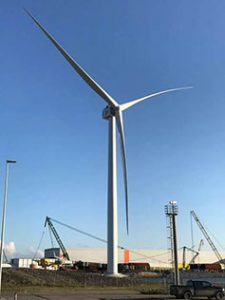 (longer than a football field) 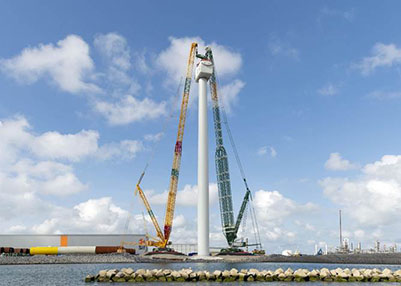 Two Liebherr LR 11350 cranes, with 500-foot “Power Booms” in matching super lift configurations, were selected for this project. The cranes had a capacity of 461 tons each in this configuration and were working at 96.1 percent of capacity. The load was raised to elevation at a 78-foot radius. Then both cranes traveled forward to center the nacelle over the tower. The Top Spreader attached to each crane hook and had a single hook centered on the bottom. It had a working capacity of 881-tons and was load tested to 970-tons. Three inclinometers were installed on the beam to allow the crane operators to maintain the beam in a perfect level condition from the operators cab at all times. It is impossible to determine if the beam is level at that incredible height. if the beam exceeded the out of level limits, one of the cranes would have been overloaded. With less than 5 percent reserve crane capacity, it wouldn’t take much of an out of level condition to result in disaster.

The Nacelle Lifting Tool (Bottom Spreader) was attached to the top spreader and the nacelle hung from slings below. This devise has a capacity of 1100-tons and was tested to 1377-tons. The three bottom slings were attached to specially designed Lifting Pins. These pins extended through the outer shell of the nacelle and facilitated easy/safe access for the riggers to connect and disconnect the rigging from inside the nacelle.

All lifts, including the nacelle, were completed safely and according to plan. It was very exciting to be a part of this historic event.