Recently, I have had several discussions and inquiries regarding reactor runaway events and whether automatic depressuring systems are needed for hydroprocessing units.

Since hydroprocessing reactions are exothermic, a temperature excursion can occur when heat is not removed as fast as it is created in the reactor.  A temperature increase of 15°F (8°C) indicates that something significant is happening in a reactor that requires attention before the excursion turns into a runaway reaction.  One of the reasons that we use 15°F as a key number is that it takes an increase of about 15°F to double the hydrocracking reaction rate when zeolite catalysts are employed (see Table 1 below).  At any rate, an increase in reactor temperatures of 15°F is significant in any hydroprocessing unit.

For this discussion, we’ll use the following definitions:

Reactor Runaway – Temperatures in the reactor are increasingly out of control and immediate action is required.

The cause of the substantial heat release (hydrogenation) gives us a clue on how to stop an excursion or runaway.

We’ll use the fire triangle shown below as an analogy – if we remove one leg of the triangle, the reaction will stop.  Obviously, removing hydrogen is the only feasible leg of the “excursion triangle” that can be easily and quickly removed. 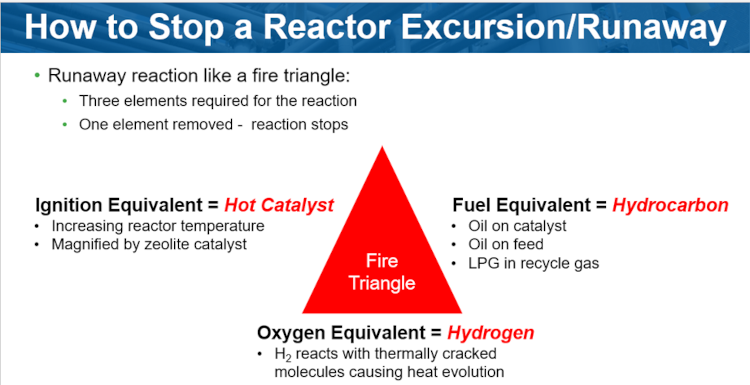 Because a hydrocracker runaway event can quickly turn into a loss of containment on the reactor outlet pipe, hydrocrackers must have automatic depressuring systems where depressuring is activated by any one of the following conditions:

The “in-between” units like catalytic dewaxing units should evaluate the risk associated with each unit and consider if an automatic depressuring system is required or if a manual system is sufficient.  It should be noted that many companies have added automatic depressuring systems to catalytic dewaxing units and other units that use a zeolite catalyst with moderate activation energies.

Decades of history and incidents with hydrocrackers tells us that manual depressuring was not always activated quickly enough to be effective.  The industry defining incident was the TOSCO hydrocracker runaway.  The report for this incident can be found at the link below:

As always, questions and comments are most welcome on this and all blog entries!

Jeff Johns
Contact:
Jeff Johns has over 35 years’ experience in the petroleum refining industry. He was honored as a Chevron Hydroprocessing Fellow (Chevron’s highest technical recognition) for contributions to Chevron and to the industry. Jeff has expert knowledge of hydrocracker and hydrotreater design/operation, optimization, and troubleshooting, and has substantial experience in other key refinery processes. Jeff managed hydrocracking and hydrotreating technology in Chevron’s refineries worldwide where he developed and implemented best practices and projects to improve safety, reliability, and profitability. One of his special interests as a technology mentor was developing and delivering training. For 20 years, Jeff led an ad hoc Industry Committee of hydroprocessing experts dedicated to sharing safety and reliability information among North American Refiners. He was a member of the AFPM Q&A Panel in 2004 and directed multiple technology seminars as a member of the AFPM Q&A screening committee. Jeff served on the Board of Directors for Advanced Refining Technologies (ART). Jeff holds a B.S. degree in Chemical Engineering from the University of Utah. He holds six patents in hydroprocessing technology.